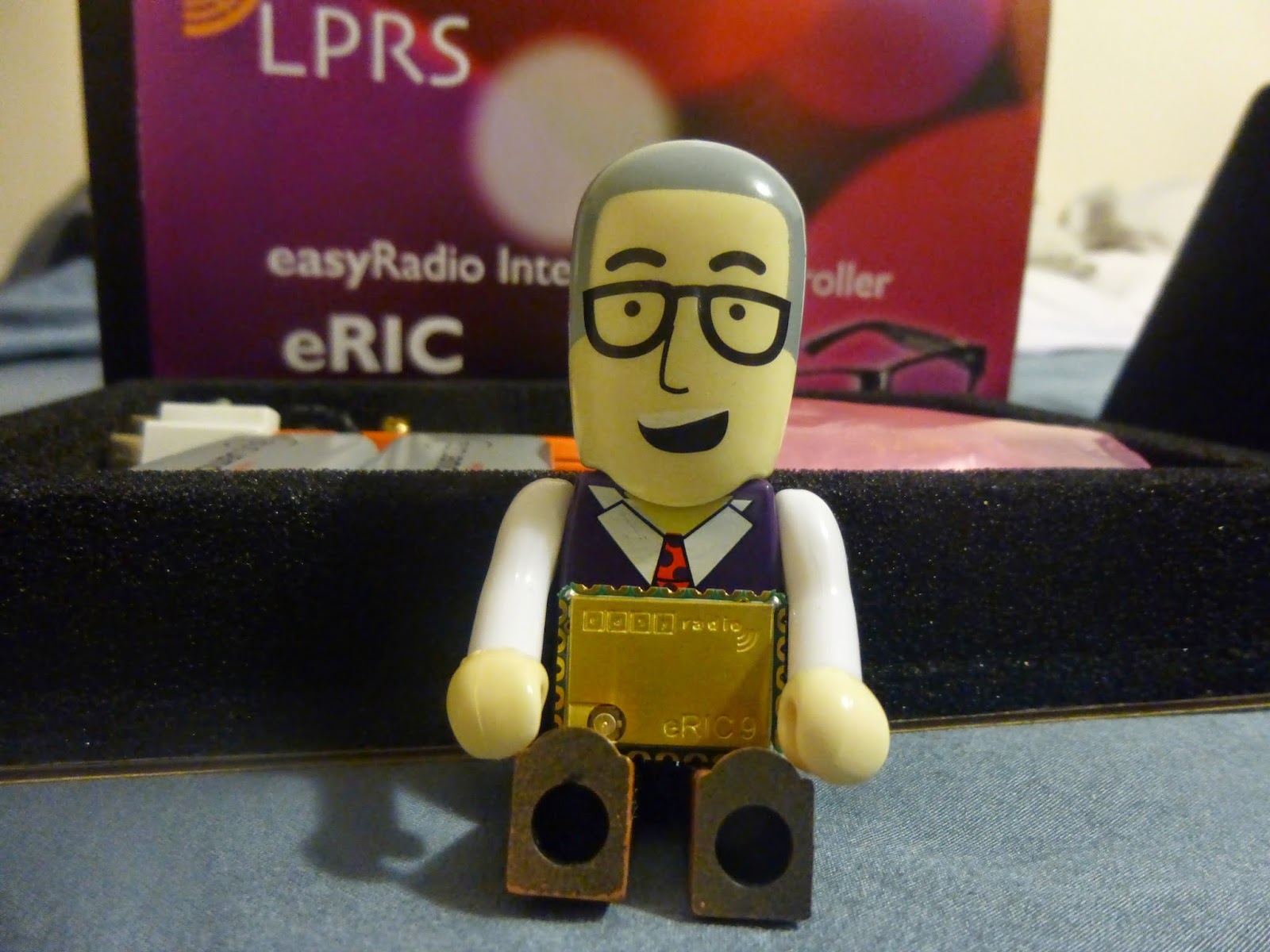 I would like to thank Element14 and LPRS for selecting me for this Road Test Review. This was an interesting and fun road test due to my past experience with the Texas Instruments CC3x00 SimpleLink family, LS Research ProFlex Zigbee and Anaren AIR Zigbee modules amongst others. I was very much looking forward at comparing the ease of use of the eRIC modules as well as the range such modules could give.


Unboxing
The packaging for these module was truly surprising. The box fits everything snuggly inside with almost no space to spare, this is a nice consideration as it allows for easy storage when the kit is no longer needed. The box is made from anti-static cardboard and anti-static foam. The kit contains two eRIC modules, two development boards, two antenna for the specified frequency (433/868/915 MHz),  two type A to Micro-B USB connectors, two 9V batteries and a Wireless Mike memory stick. 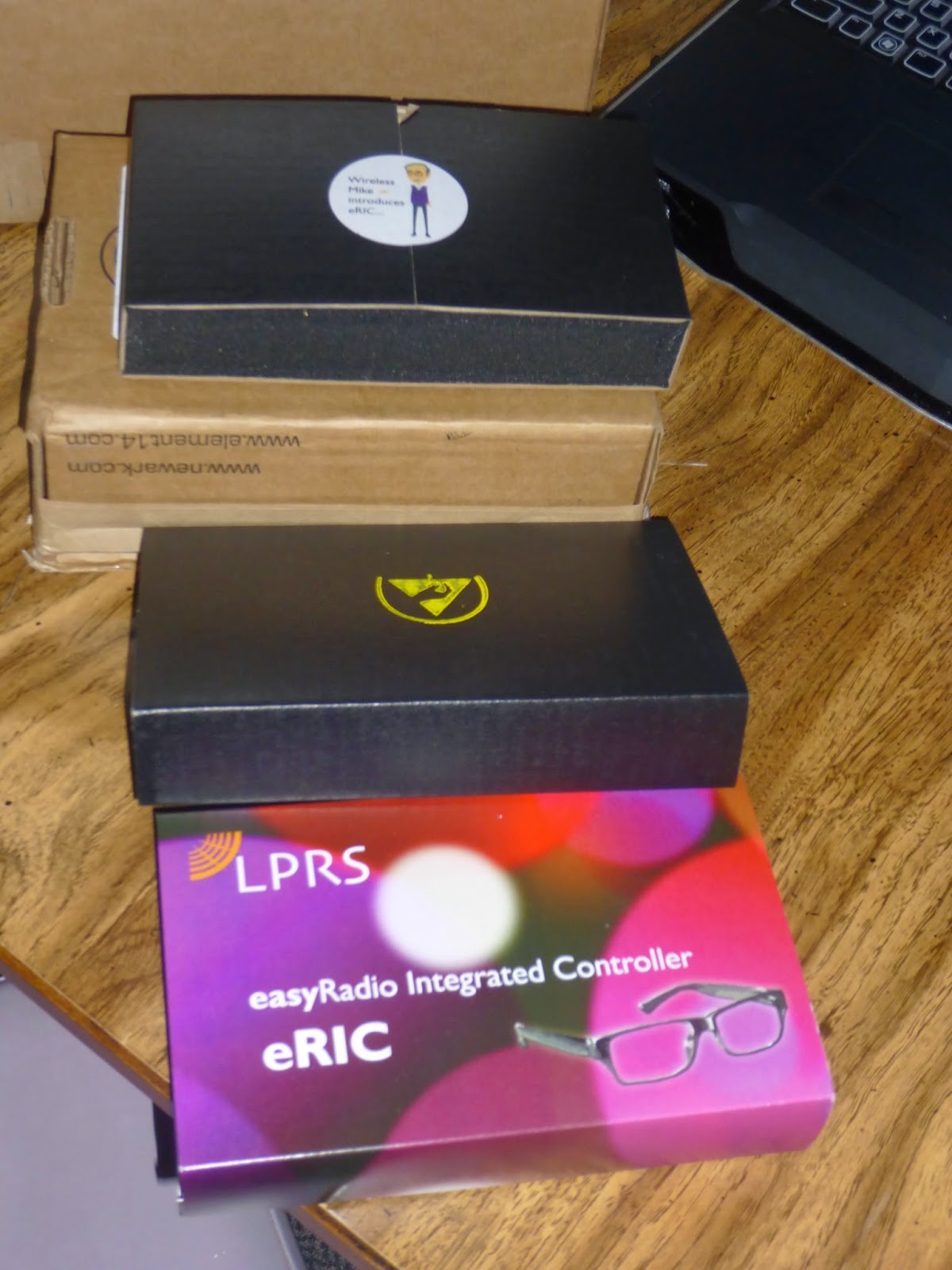 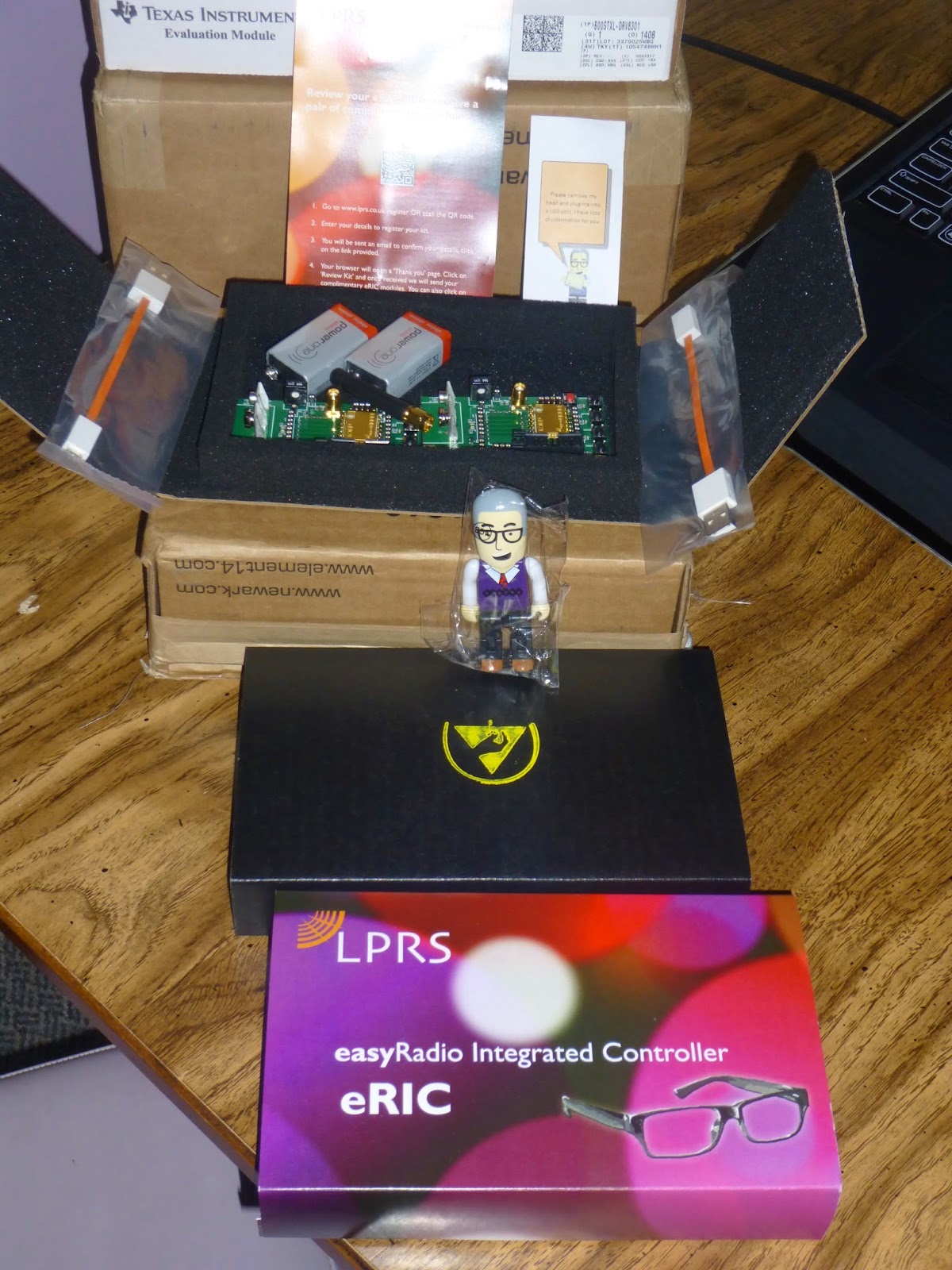 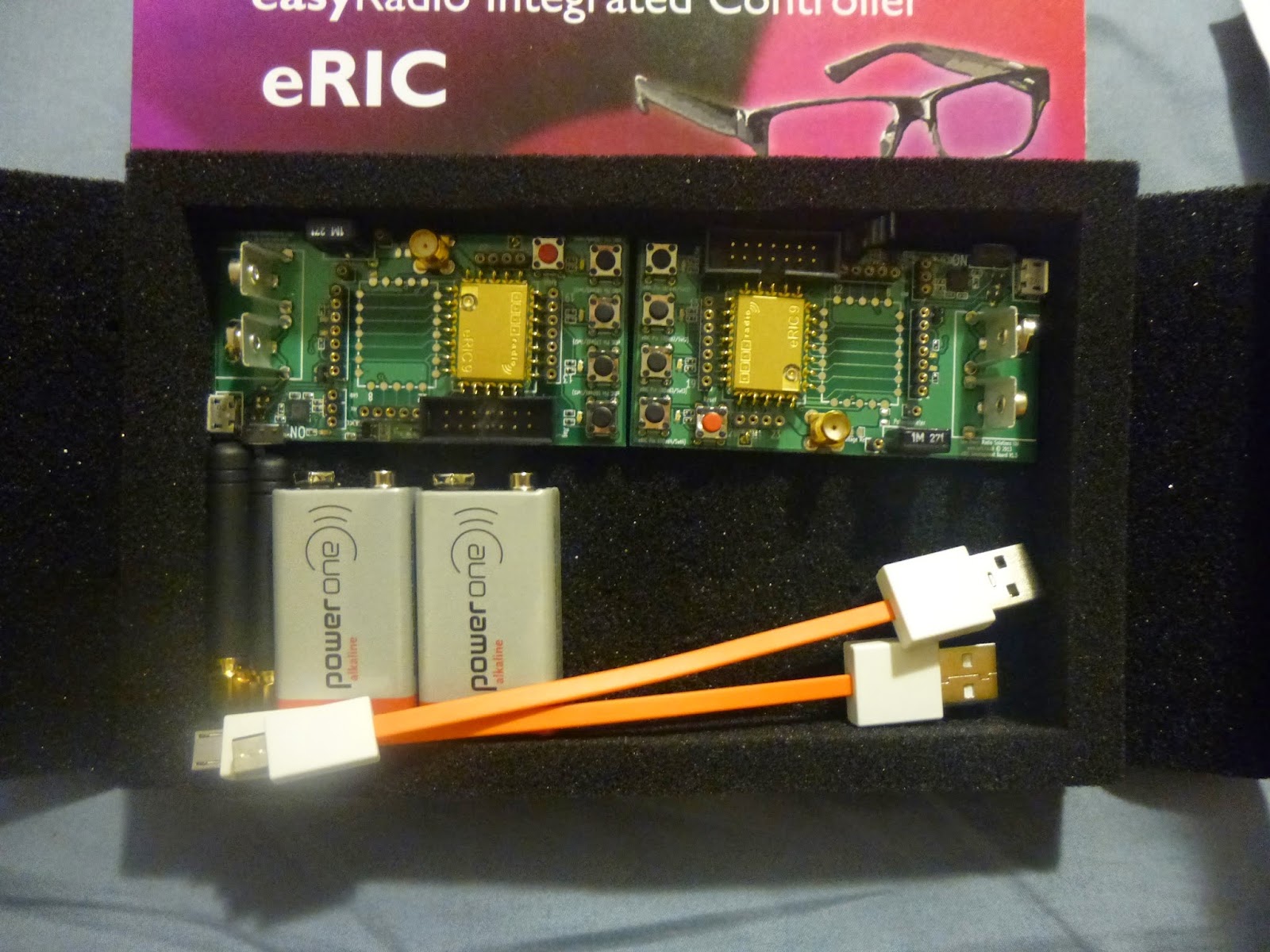 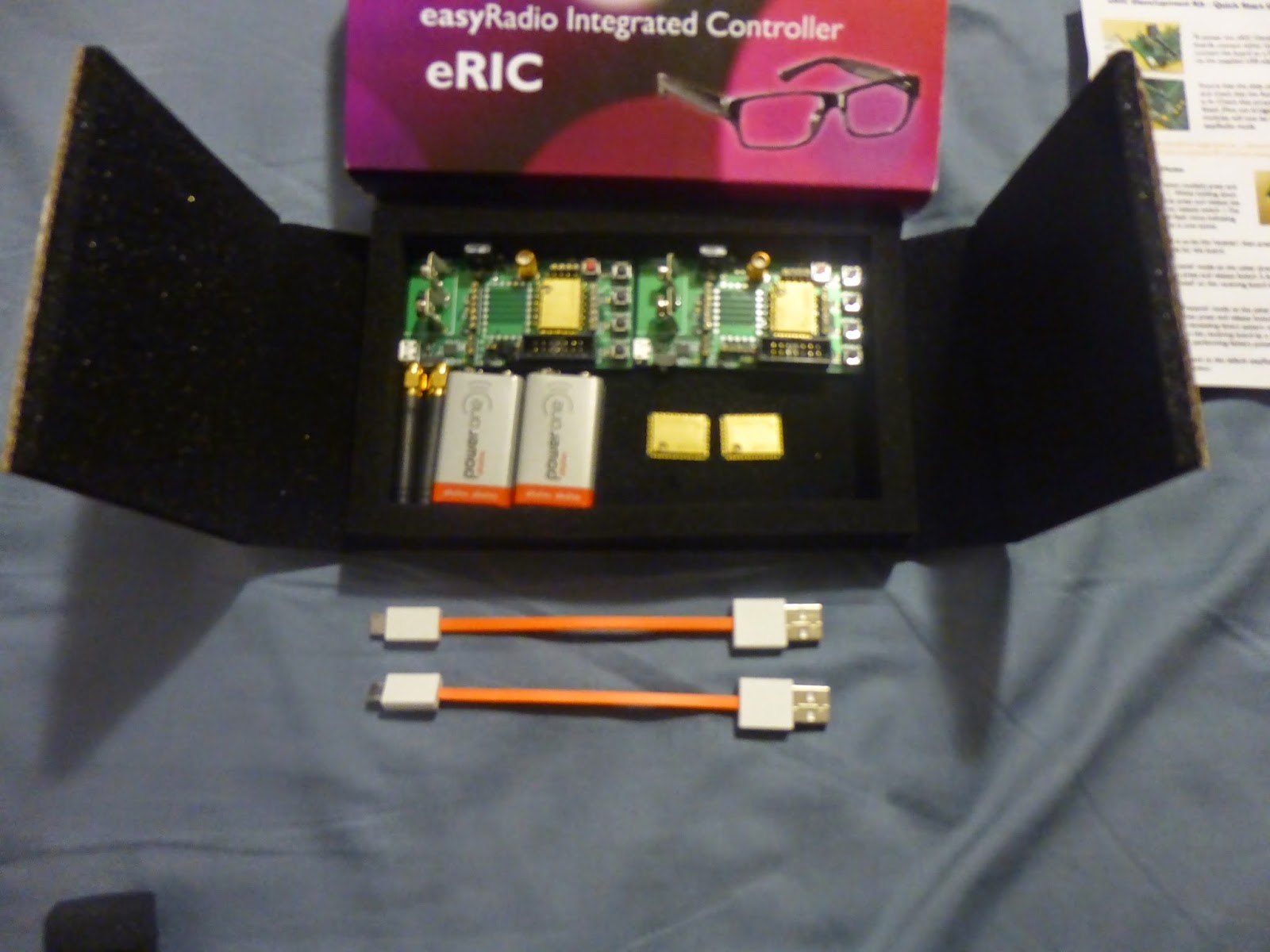 The models are location specific, this means that a different frequency is used depending on the country the modules are sent to. Europe models use 434 MHz while North America modules use 868/915 MHz. The modules are easily set apart by the markings on the individual module. The Europe modules have a “4” in the lower right corner while those for North America have a “9”, this can be seen in the picture below. 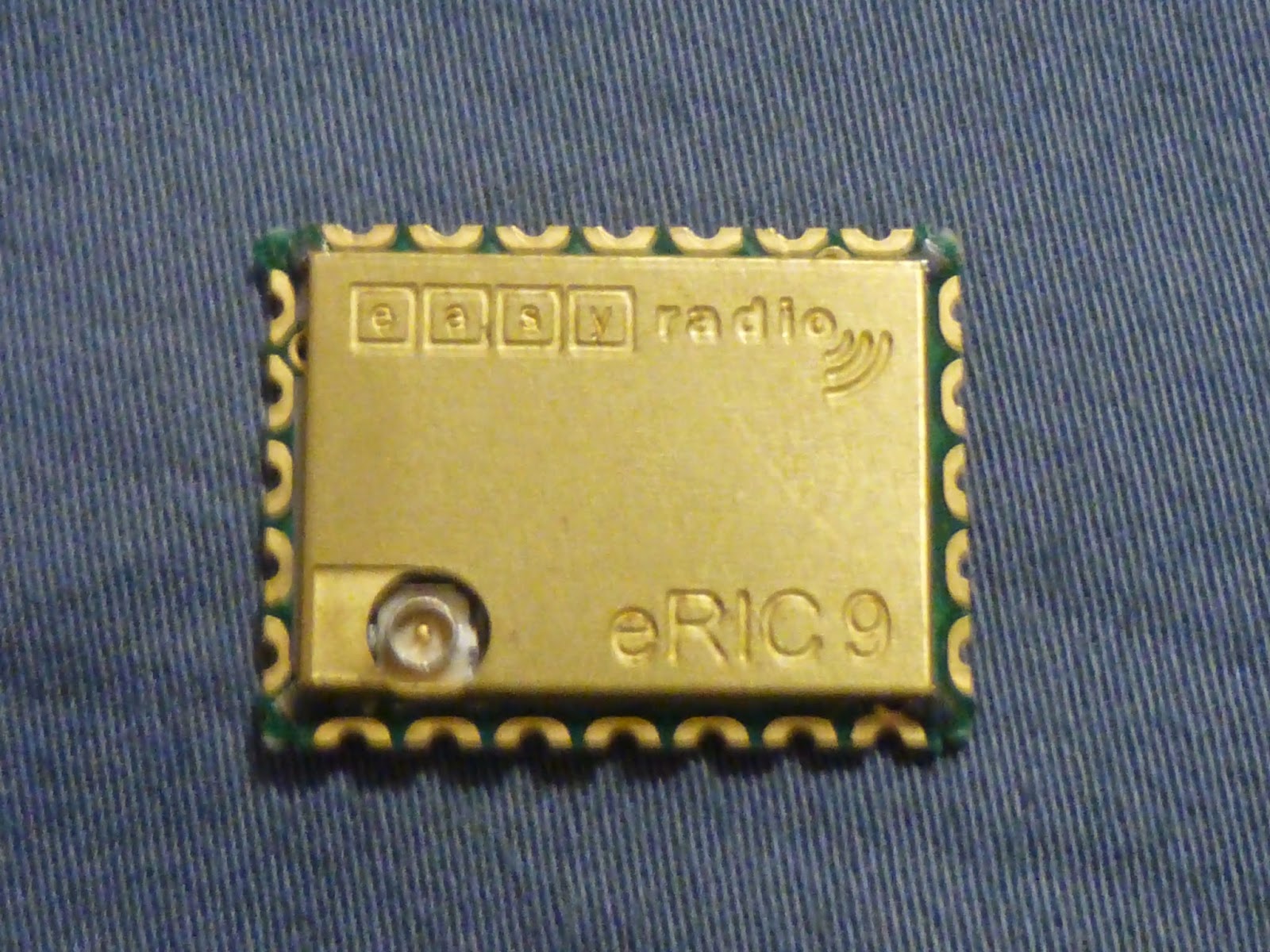 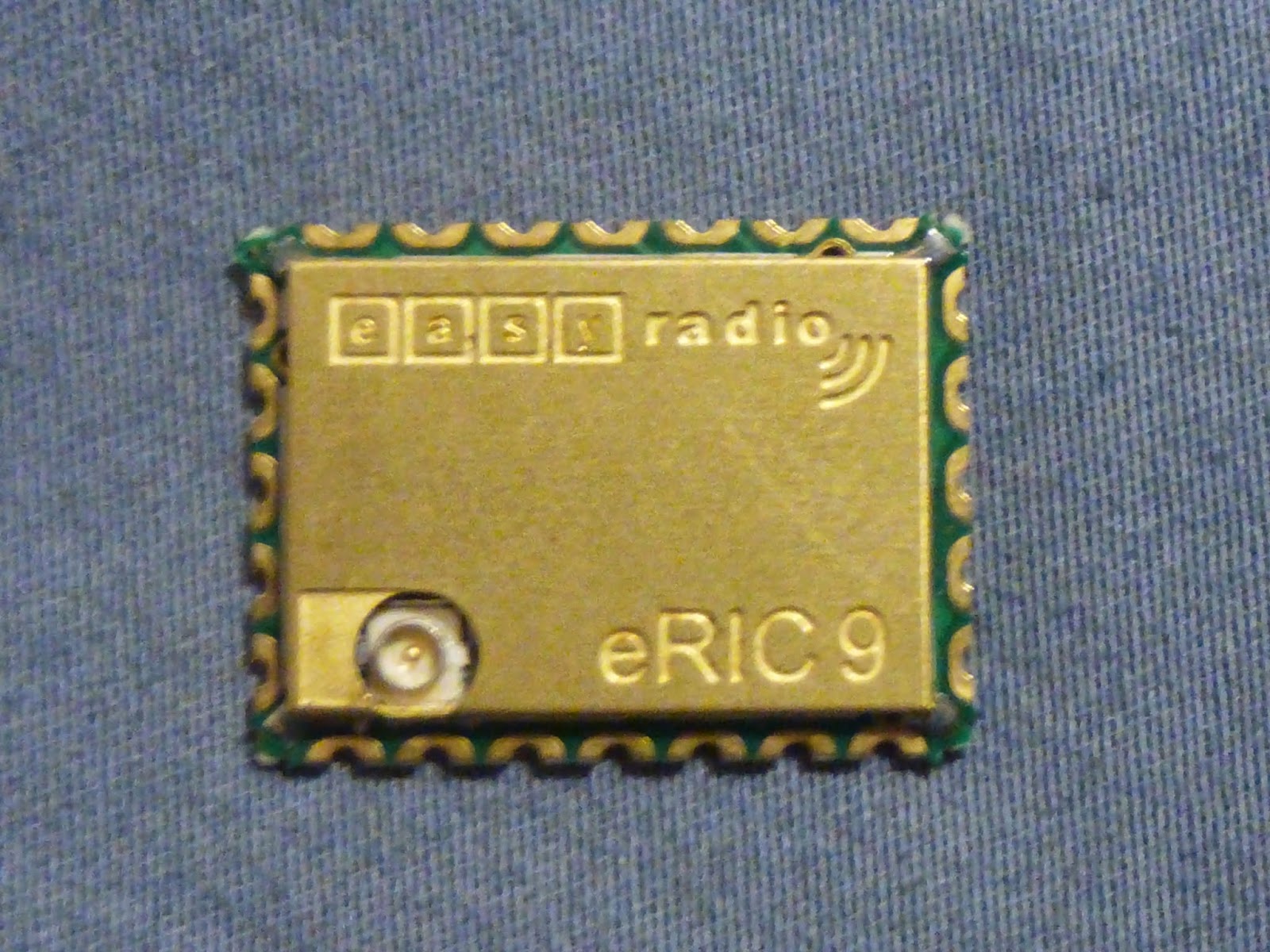 
First Impressions
After opening the kit it is a simple step to get the kit working to see what the kit is capable of. It is this step that gives the user there first impressions of the kit and modules and aid in deciding where to move forward with such a unit or not.

The onboard demo allows for either choosing a predefined flashing sequence or an echo of the button press of a tester. The predefined sequence is useful in quickly and simply determining the range the modules can handle. To get this demo working it is a matter of 3 button presses on each development board respectively. This is a simple and easy process, button #1 is pressed and held for 2 seconds, LED #3 & #4 will flash twice and then either button #2 (transmitter) or #4 (receiver) is pressed to choose the functionality that module is to take. 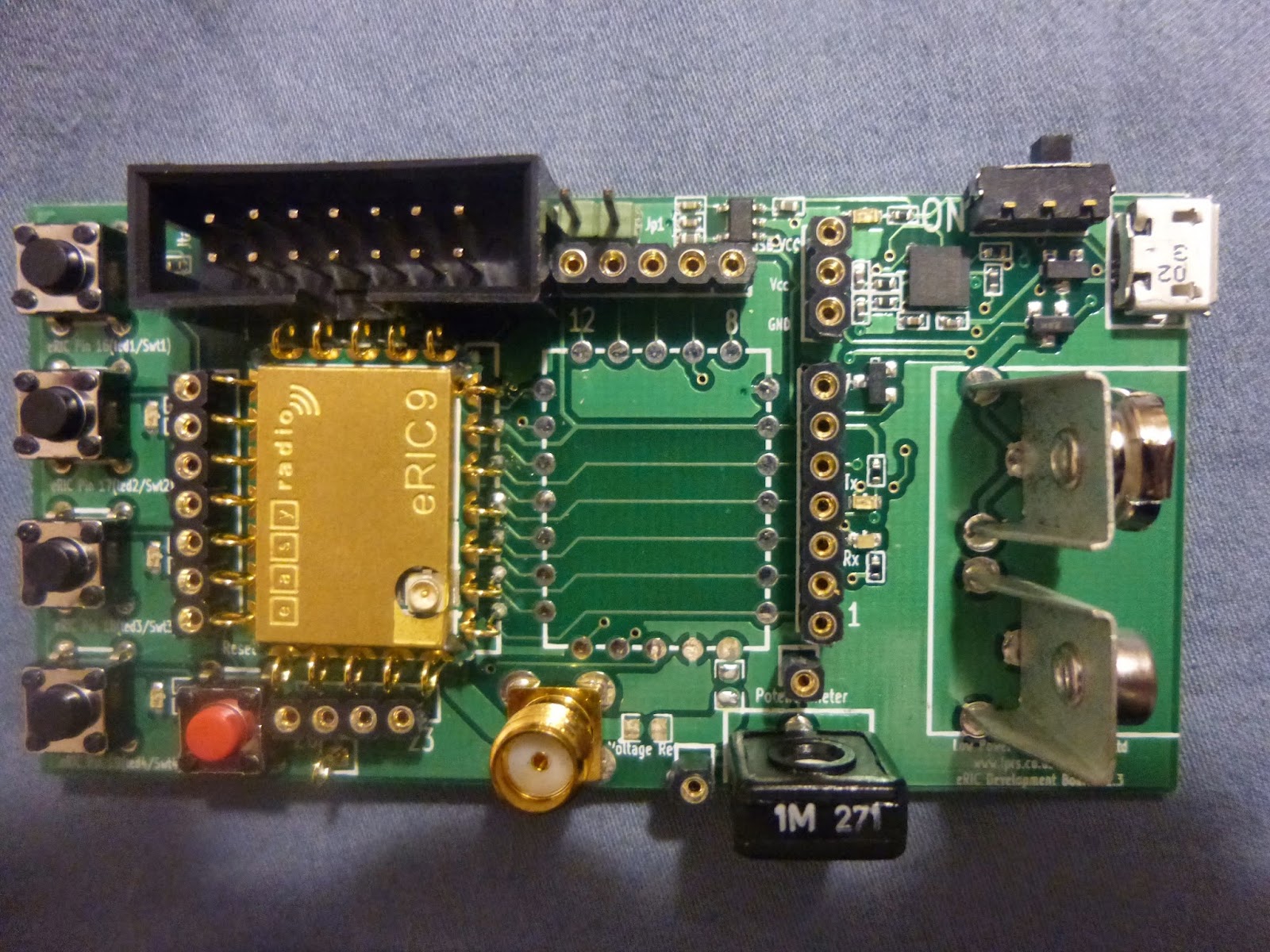 Figure 3. Test buttons located on the left side

Hardware overview
Modules
The eRIC modules are encased in a distinct gold plated RF shielding can with an opening for the u.fl connector and have 22 gold plated connection points. The connection points allow for the modules to be fully and easily used for a vast array of applications. The modules on the uC are also fully accessible allowing for high speed communication over SPI and I2C as well as lower speed communication over UART. There is also the ability to use the  GPIOs, ADCs and WDT all of this makes the eRIC an easy module to integrate into most projects. With 22 connection points at standard 0.1” pitch the module can easily be used with standard headers and breadboarded if needed. The different modules (North America vs. Europe) are easily distinguished from the number after the module’s eRIC marking. 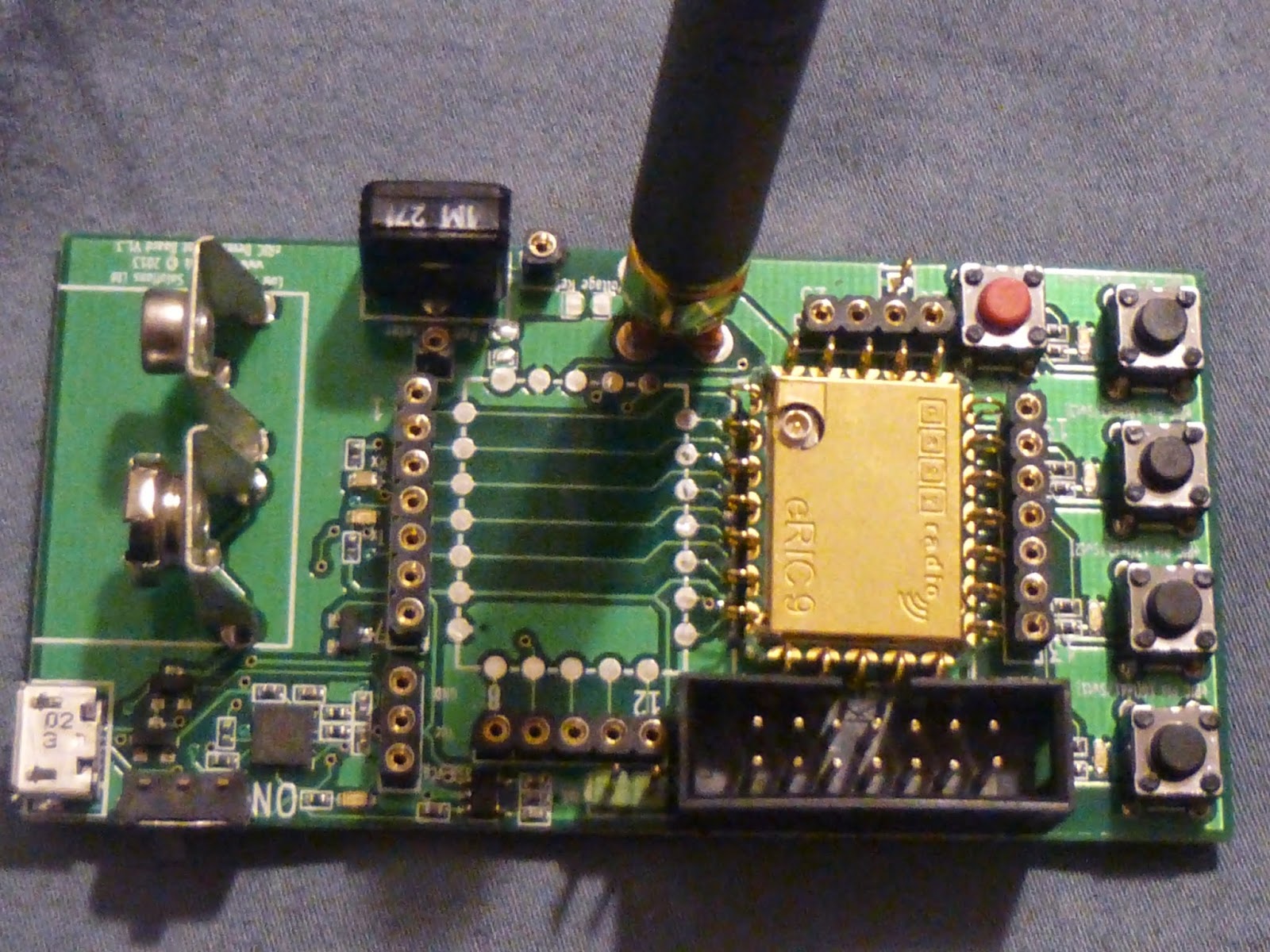 
Development Board
The modules fit easily and snugly into the development board and provides all necessary connections to the modules peripherals. The boards allow for a module to be soldered to the board or to use those pads as permanent test points. The development boards also provide a method to program the modules either through USB or through JTAG. There are 4 buttons to use for GPIO input and 4 LEDs for GPIO output allowing for crude debugging or program testing. Also included on the development board is an SMA connection for an external antenna. The antenna has been previously matched removing any need for set up by the end user. There is also a variable resistor for use with the modules accessible ADC. The on board battery connector allows for the development kit to work remotely and be a prototype substitute for a planned product.

The choice of battery is interesting due to its lower mAh (~500 mAh) compared to that of a AA battery (~1500 mAh). Considering the voltage regulators need to reduce the voltage from 9V to 3.3V instead of 4.5V to 3.3V the efficiency would definitely be lower. At the same time the use of a 9V battery allows for one battery to be used in a more compact form.  Since this is mainly for development this shorter run time would be acceptable.


easyRadio companion software
The kit comes with easy to use test software. The software includes easy configuration of all the basic modules wireless systems. These systems include UART baud rate, transmit power level, desired channel (frequency) as well as the over the air data rate. All of these settings allow for easy testing of the module in desired scenarios. This may include how the modules may interfere with or be disturbed by other systems, what is the optimal data rate so as not to lose data packets. Also included in the software is a test tab allowing for selecting high/low side and modulated carrier allowing for further testing of the RF signal with other systems. Also available in this tab is the ability to get the module version and the raw data being returned from the modules.

Figure 5. The six screens viewable on the easyRadio Companion Software

The last tab allows for over the air transmission. This tab has an option for repeated sending at a rate of 1Hz as well a for a local echo. The one thing missing would be the ability to send large quantities of data in this test method so as to see what limits your unique situation encounter.

API
The modules come with what LPRS calls eROS (easyRadio operating system). This is a simple “operating system” to allow for a greater use of the modules subsystems. There is a large API (~100 functions) that allows for setting up the wireless, the UART, SPI, ADC, clock speed, interrupts etc. I have tested some of these calls and they seem to work with little issue, and it really helps to reduce the setup and prototyping stages.

The modules are coded using CCS from Texas Instruments and as this is not a foreign IDE there was little trouble using that as well. The code uses a predefined linker file as there is a bootloader on the modules that needs to be accommodated for. While this allows for security for LPRS’ code it makes coding slightly clumsy, its not a showstopper but it has some drawbacks. Over all the API it well defined, easy to follow and gives a lot of control of the module.

Range
Some basic testing was conducted with these units to see what type of range they have (a Spectrum analyzer would be awesome Element4… wink, wink). Since this is supposed to be a IoT module and presumably used for sensor networks there were two basic test done. The first was to place one unit  transmitting in one corner of a house while walking around with the second to determine when bits in the sequence where skipped. In a standard North American house both the the main floor as well as the basement where traversed with no missing bits in the sequence. The second test was a line of sight this was done by placing the unit first at shoulder height on a plastic stand and then on the ground transmitting. Again the second unit was receiving and was used to look for missing bits. The first test resulted in approximately 165 meters while the second test resulted in approximately 110 meters. While these numbers may seem small for the size and power consumption these are respectable numbers. Lastly both antennae were removed and as expected barely a meter out there was no longer any reception.

Comparison to CC3x00
As I have just completed a road test of the CC3x00 SimpleLink family it would be somewhat acceptable to compare at least the control of both products. For the most part the CC3x00s are a lot more complex and take longer to get up and running. Even with their added functionality they are more complex over all and harder to use than the eRIC modules. That being said both modules have their place in the IoT arena. For small sensor networks that could then relay information back to a single point the eRIC modules would be sufficient. However, for anything more complex I would suggest a CC3x00. Part of the reason for this is the lack of protocol on the eRIC modules. All communication is done via broadcast and therefore all addressing, message type would need to be implemented by the end user. While some will say this allows for flexibility it also can slow down some development.

Price point comparison vs features
For the price ($25) of these modules (not kits) they deliver a lot. They are easy to use, simple to set up and work out of the box. In comparison to the CC3100/CC3200 ($34/$23) they would be lacking a programer as at least one of them includes one and the other for an extra $15 it would be included. The eRIC kit on the other hand is $190 for a kit that only includes two modules any extra modules would need an antenna as well as a way to connect to the rest of your project, I’m not sure the extra $120 is worth it for the simplicity in the software.