SmartCharge 2.0: How to Install Uninterruptible Backup Lighting Cheaply and Efficiently 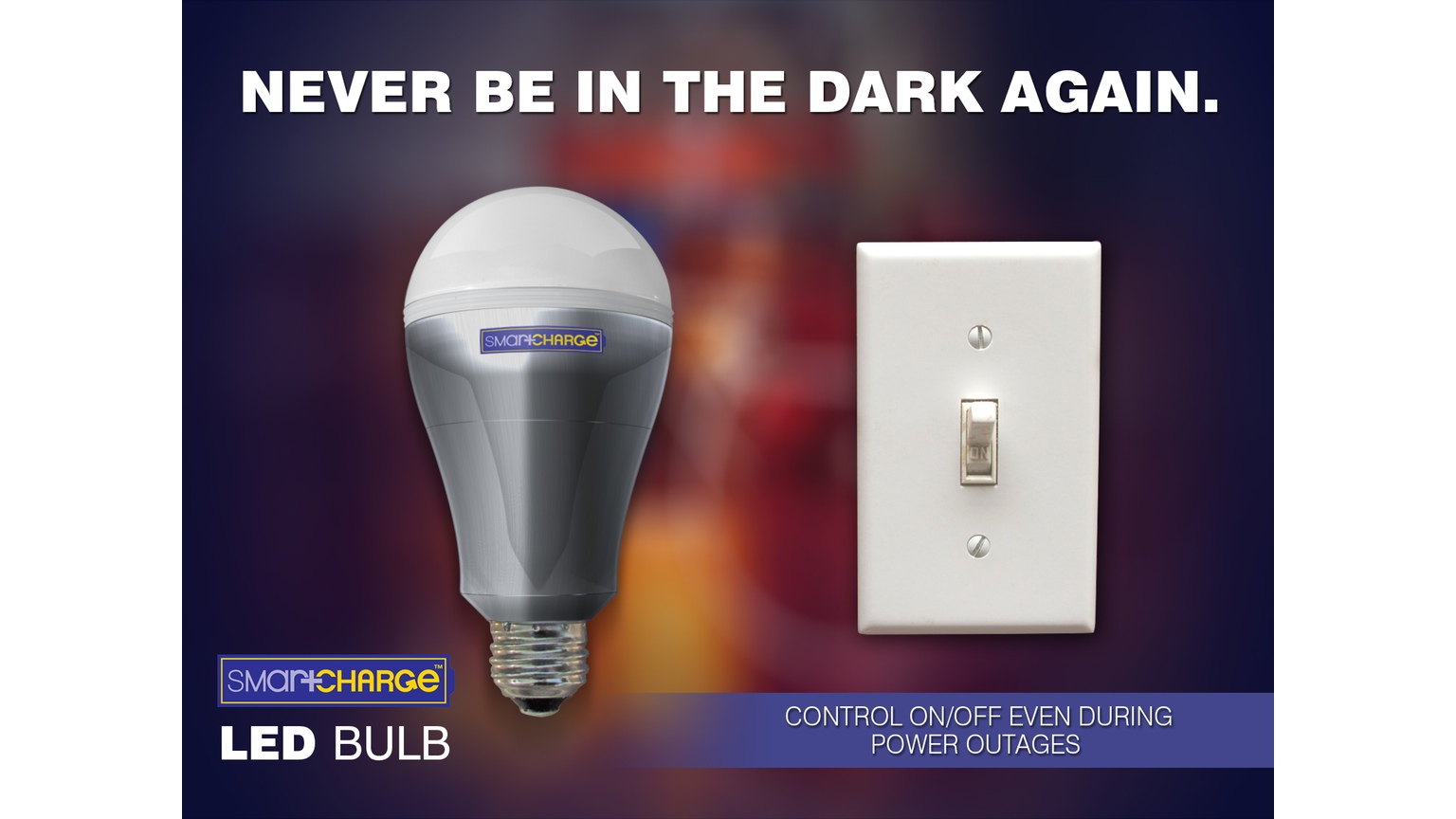 With extreme weather and power outages becoming more frequent, the need for a light that is not dependant on the grid is becoming increasingly important. Most people rely on flashlights or paraffin lamps for this but, this is often impractical and not always reliable such as when batteries are dead or when a light is needed immediately to prevent someone from getting injured.

The other option is emergency lighting but, this can be expensive, needs maintenance and is often fixed in place. Having it fixed in one location reduces its usability should a different area become higher priority.


Out of the box experience - Unboxing 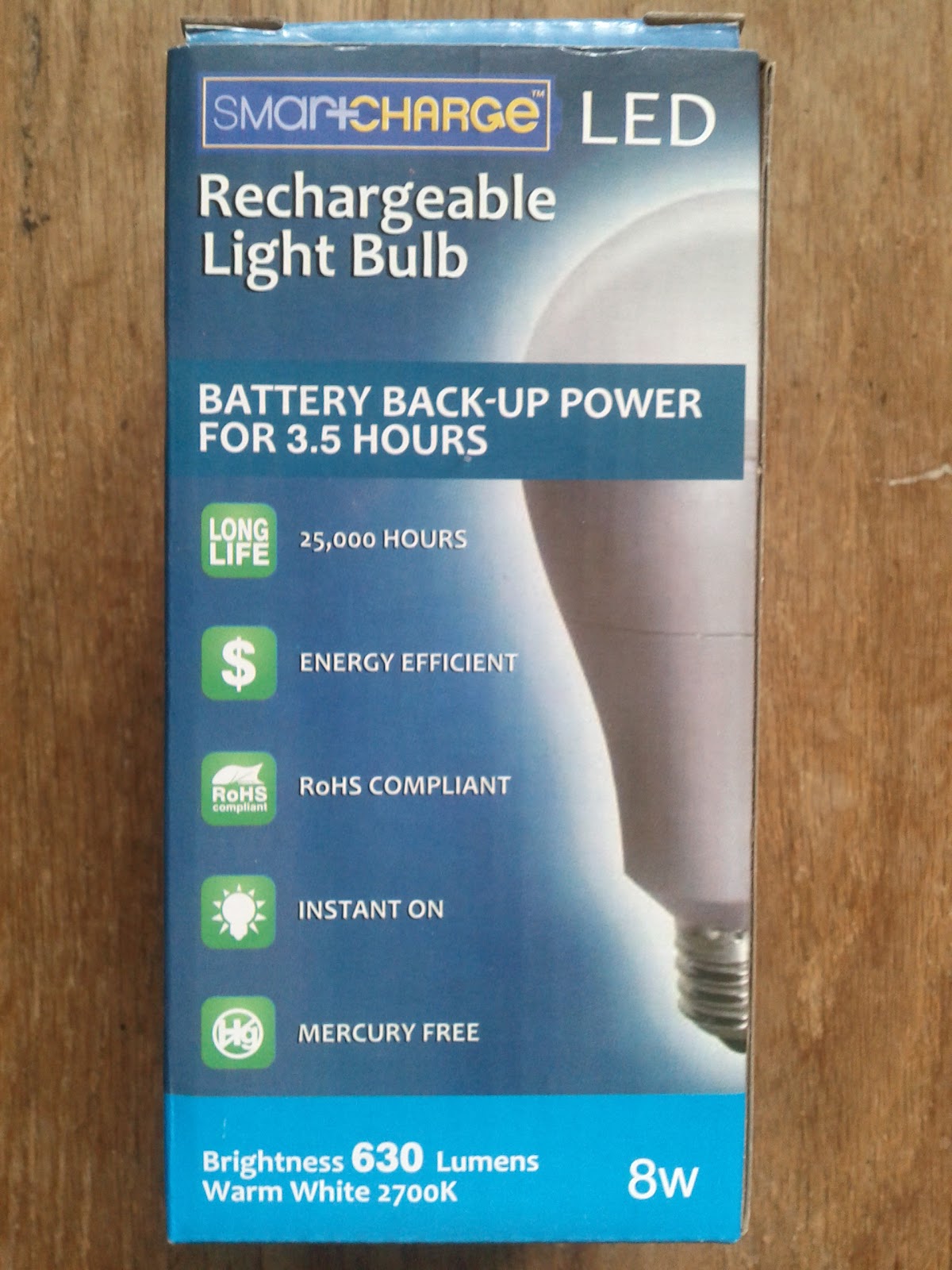 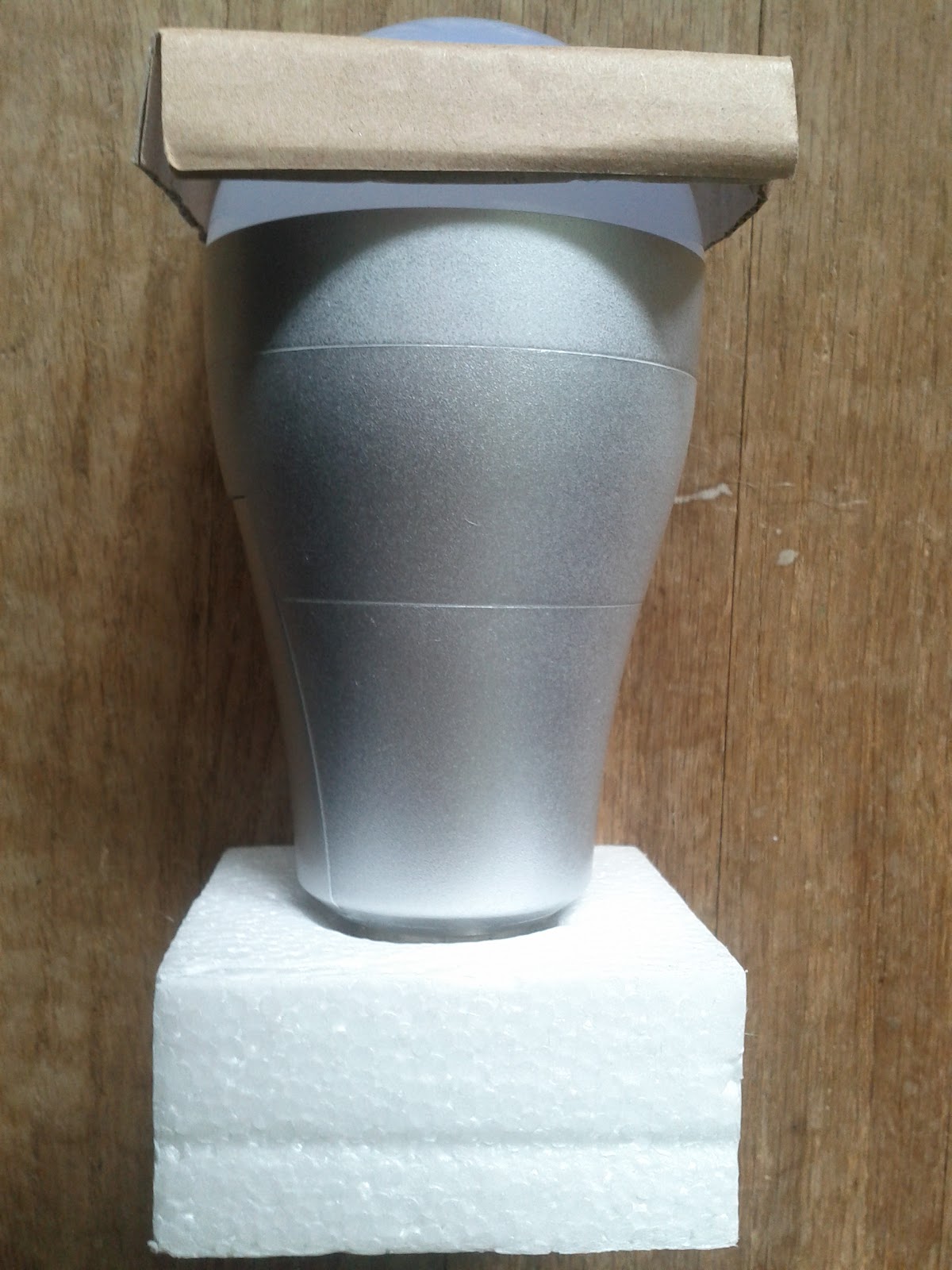 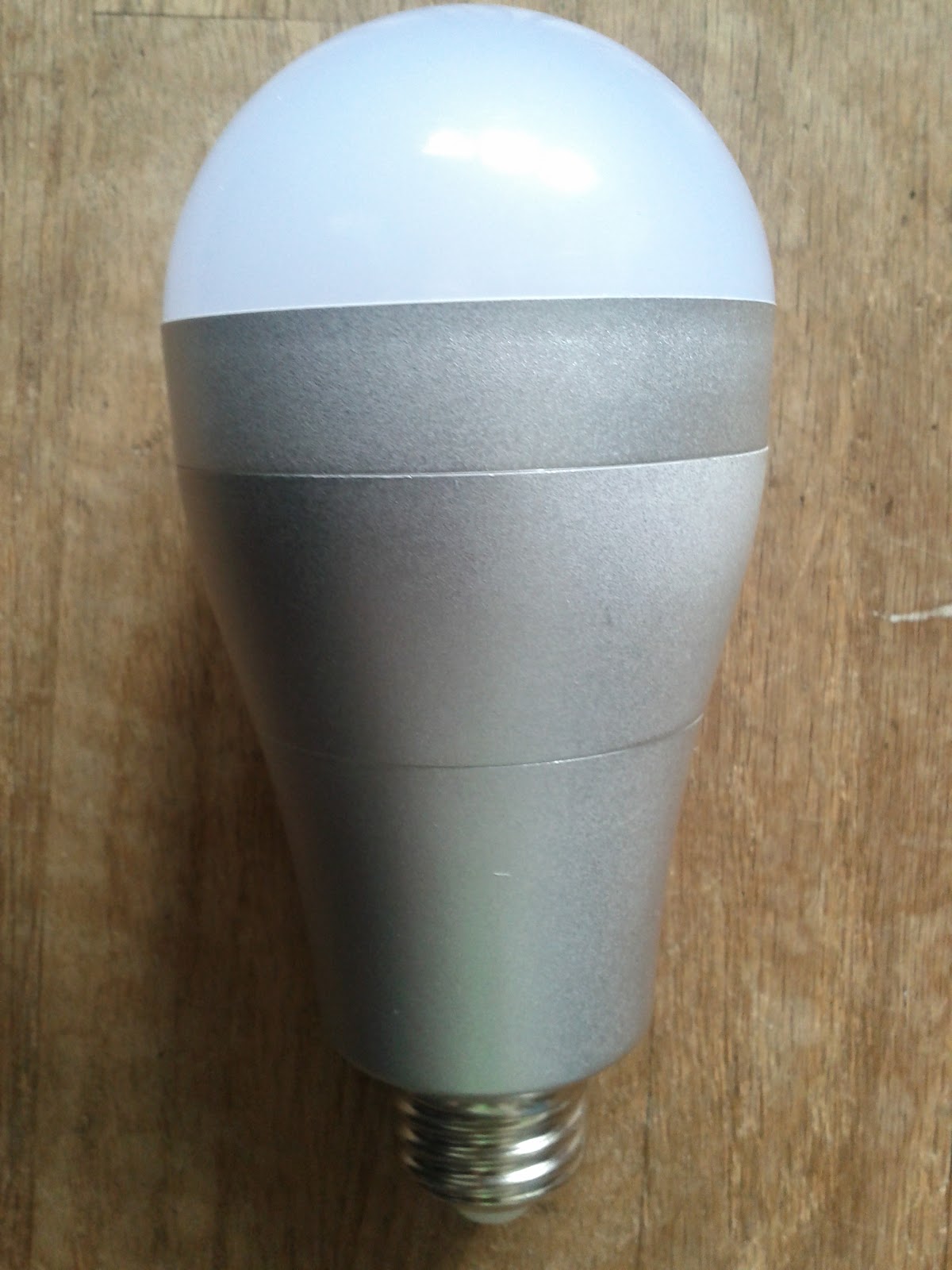 Immediately after installation the bulb works as a regular LED bulb. In the same way a regular bulb turns on when needed so does the SmartCharge 2.0. The added feature of the SmartCharge 2.0 will kick in only after an extended period of charging. A full charge cycle, for an empty battery, is rated at 6 hours

Immediately after taking the SmartCharge 2.0 out of the box you can tell that it is not a regular bulb. The SmartCharge 2.0 has both a different feel and weight. Compared to a regular LED or CFL bulb that has a shorter housing the SmartCharge has an extended housing and just a simple silver paint coating the bulb with no markings or ratings. This is a potential issue for someone using the bulb but has no prior knowledge what the bulb is or where it is from. A case would be in a house were a past tenant installed the bulb and forgot about it when moving out. 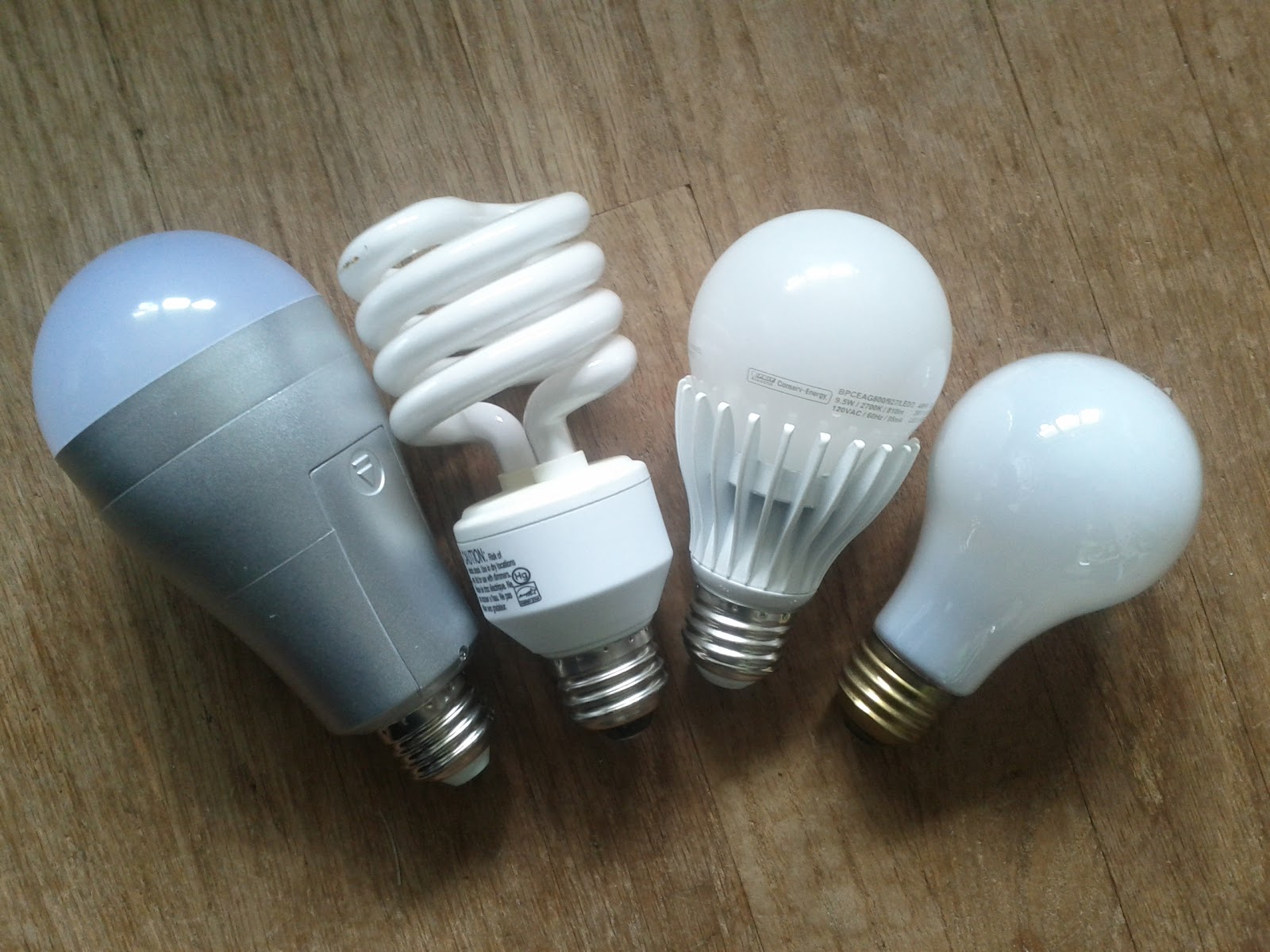 The battery housing is screwed in by a small philips screw. While this should almost never need to be opened the housing with the screw again is not done in an athletically pleasing manner causing the bulb to look out of place in any lamp that the housing is visible. 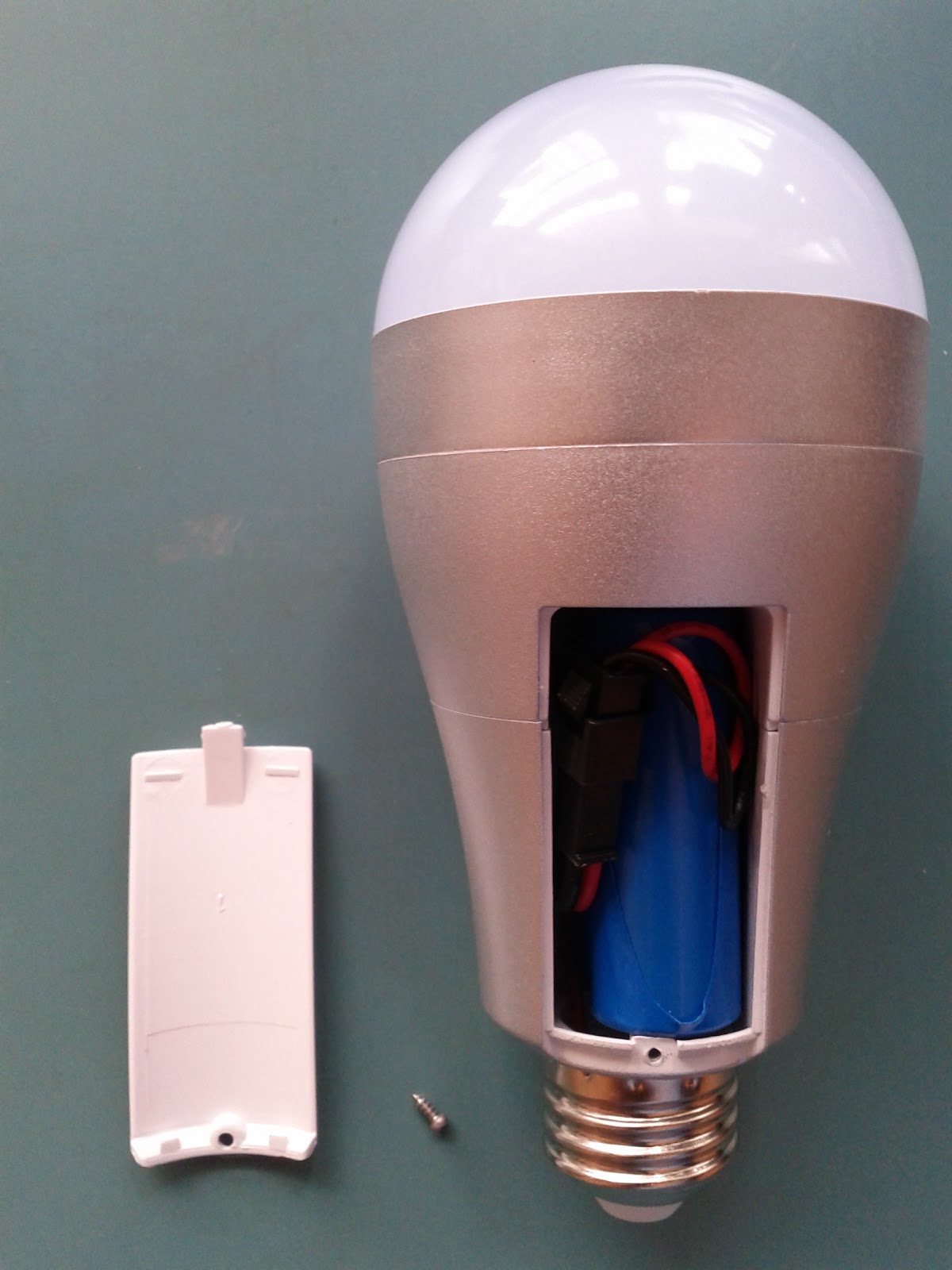 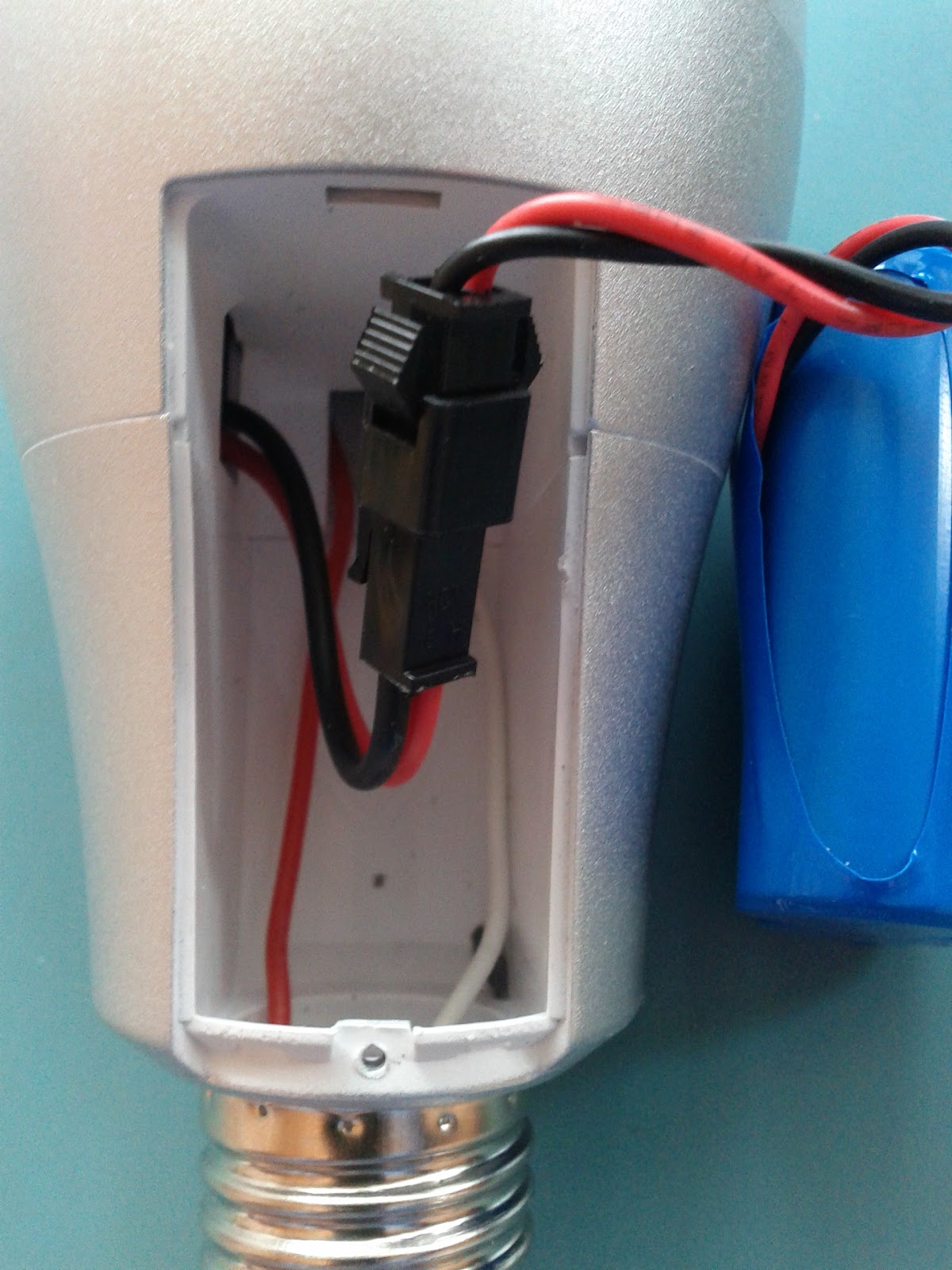 Battery housing in the base of the SmartCharge

As the SmartCharge is meant to be used in situations where the power abruptly shuts off, the bulb was tested as such. In order to test the bulb two methods were employed. The first method was that suggested by SmartCharge, connect a incandescent bulb or other resistive load in the same powerbar as the SmartCharge bulb with the power bar disconnected from the mains. The second method used was that of turning off breakers (removing fuses) in the breaker box right where power comes into the home. The reason for the second method was to verify the claim that almost all circuits in the home have a resistive load on them somewhere in there system.

Using the first method it was found that he SmartCharge worked with no issues. Using a 60W bulb allowed the SmartCharge to show off how it works when there is no mains power but there is a load. It was also discovered that no load is needed, just an electrical path between the two connection points of the SmartCharge bulb. For this even a short circuit would do and it did quite surprisingly without damaging the bulb.


How the SmartCharge 2.0 Works

The idea behind the SmartCharge is pretty smart and interesting. It should be noted this is all from black box testing as the SmartCharge bulb could not be opened without causing severe damage. The SmartCharge puts out a small signal, whether this is AC or DC could not easily be determined. But from some basic testing it appears to be a 3.5V DC signal. This signal if returned (i.e. there is a complete electrical path) turns on the bulb if not the bulb remains off.

It is for this reason a load is need on the same circuit as the SmartCharge bulb. The bulb needs a complete circuit to work. If there is no load there will not be an alternative path to complete the circuit and to turn on the bulb. This brings us to the need to have the SmartCharge bulb in a place that it will be in frequent use or the bulb will not work when needed.

The power behind the SmartCharge is a 7.5V and 1500 mAh Li-Ion battery in the base of the bulb. During operation in battery mode the bulb will flash when there is approximately 15 minutes remaining. In the testing conducted it was found that the run time is in the order of 3:20 - 3:35 before the bulb gave a low battery indication. This is inline with the manufactures spec of 3.5 hours, while this does not give any leeway or wiggle room for their claims it is accurate. The surprise came in the warning time. Instead of having 15 minutes as expected before the bulb when dark, it was closer to 30 minutes. This definitely would allow those in need the extra time to prepare before losing a last source of light.

The drawback to the method used to turn on the bulb, as explained above, is that the bulb is always consuming power. The issue with this is it does not apear to be a small amount of power. If the bulb is left unused for a period, a day or so, there is a noticeable depreciation in the bulbs run time. This leads to the question of what is the true power consumption of the SmartCharge.

The SmartCharge 2.0 claims to be a 8W LED bulb. While most bulbs claim a wattage they often come in under their rated value even if just slightly. Since the SmartCharge list one of its benefits as Eco friendly this was a something that needed verification. Thankfully Tektronix generously lent me a PA1000 for just such tests. What was immediately evident was the higher than claimed power consumption of the SmartCharge. While not consuming as much as an incandescent of CFL the SmartCharge was 37.5% over its rated wattage.

SmartCharge charging over a 7 hour period with the bulb on

While SmartCharge would clarify that this value includes the charge power of the battery, that is part of the bulb, also the battery is always looking to remain fully charged. In one test the bulb was left off for a number of hours. When the bulb was turned back on the battery was again being charged. This leads to the conclusion that unless the SmartCharge is in constant use, with no multi hour breaks, the battery will be repeatedly charged.

The SmartCharge box claims $0.66/year to run the bulb at 3 hours a day, this is however very misleading. If only the 8 watts for those 3 hours a day are used in the calculation then we get: 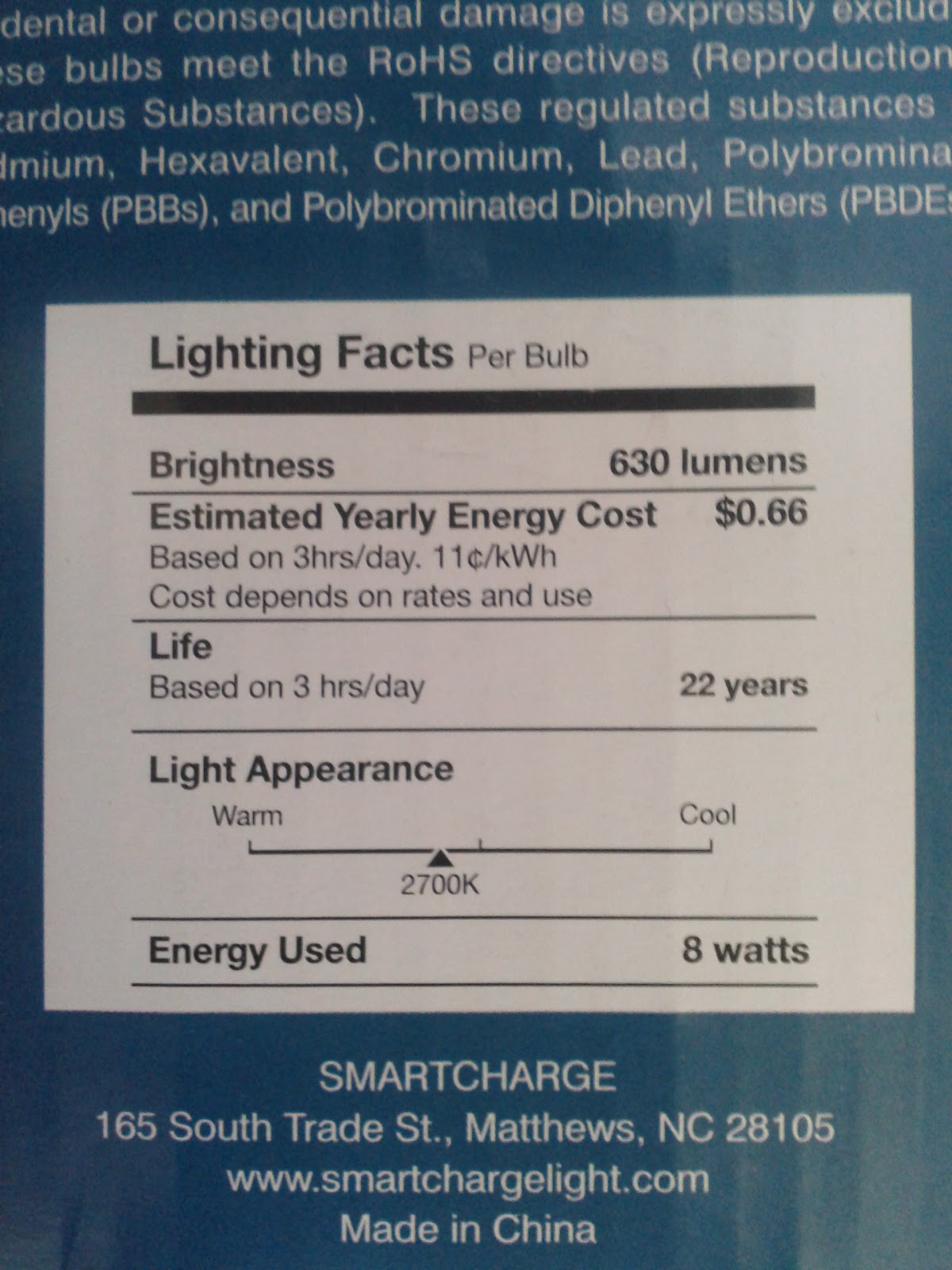 Power consumption claims on the side of the box

While this may not seem like a to wild exaggeration $0.30 is 45% over the claimed cost of only $0.66 per year, but this is still a very conservative estimate. If we look at the more realistic power consumption when using the bulb for only 3 hours a day and the need to constantly charge the battery the numbers get worse. With these calculations we can only wonder how SmartCharge was able to claim an estimated yearly energy cost of only $0.66 per year.

From a purely reliability point of view the SmartCharge has taken a large step in the right direction. During all tests to simulate a power outage there was no interruption of light nor was it even a noticeable that the power had been cut.

However there was an issue that was noticed with the sample I was given to review. There was a long unsheathed connecting wire in the base of the bulb. This wire is clearly long enough to allow the two terminals in the bulb to touch, shorting the mains power. This should not be an issue in a home with functioning breakers or fuses installed, but relying on safety equipment instead of designing with safety in mind from the beginning is not good engineering. 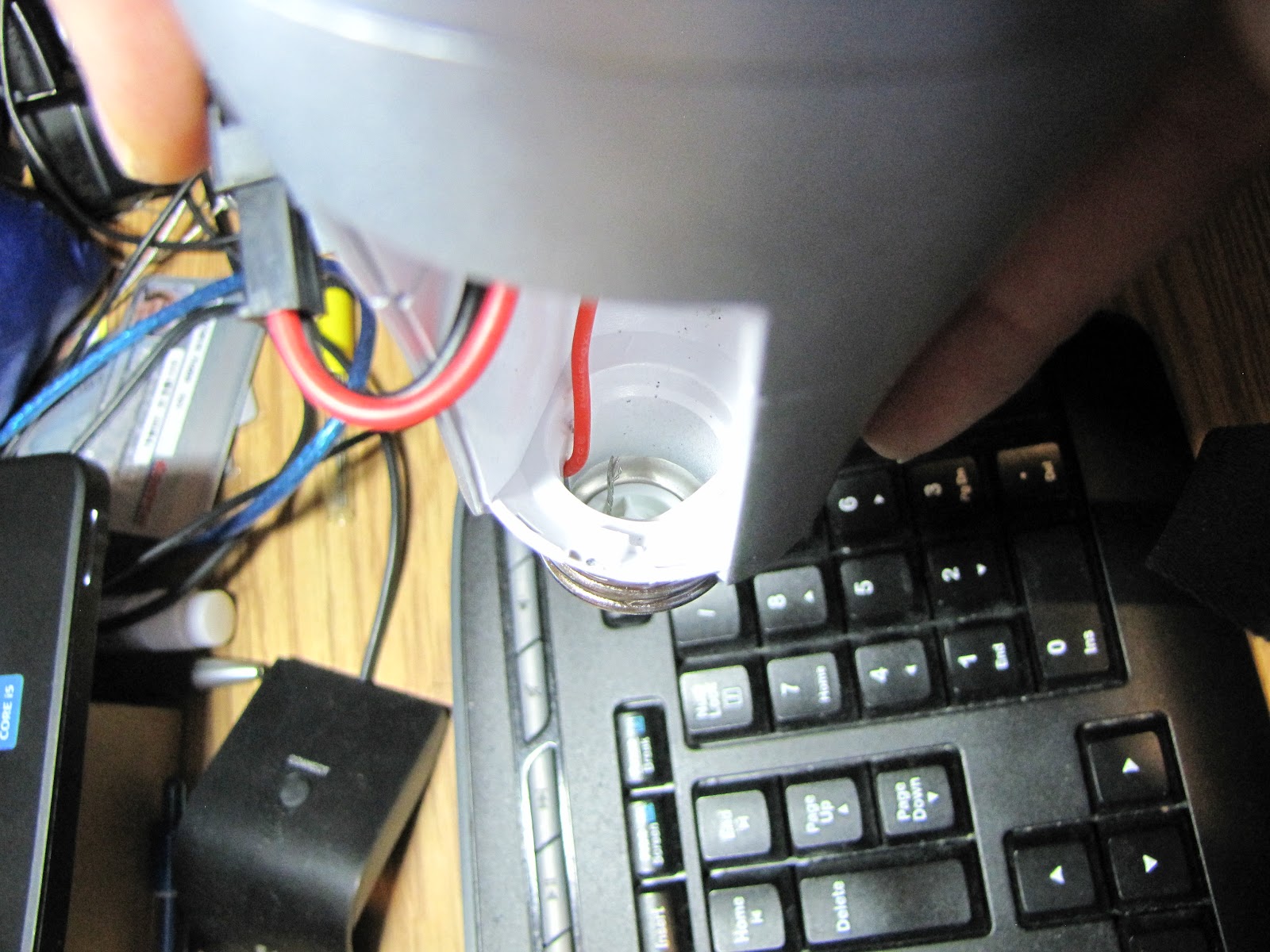 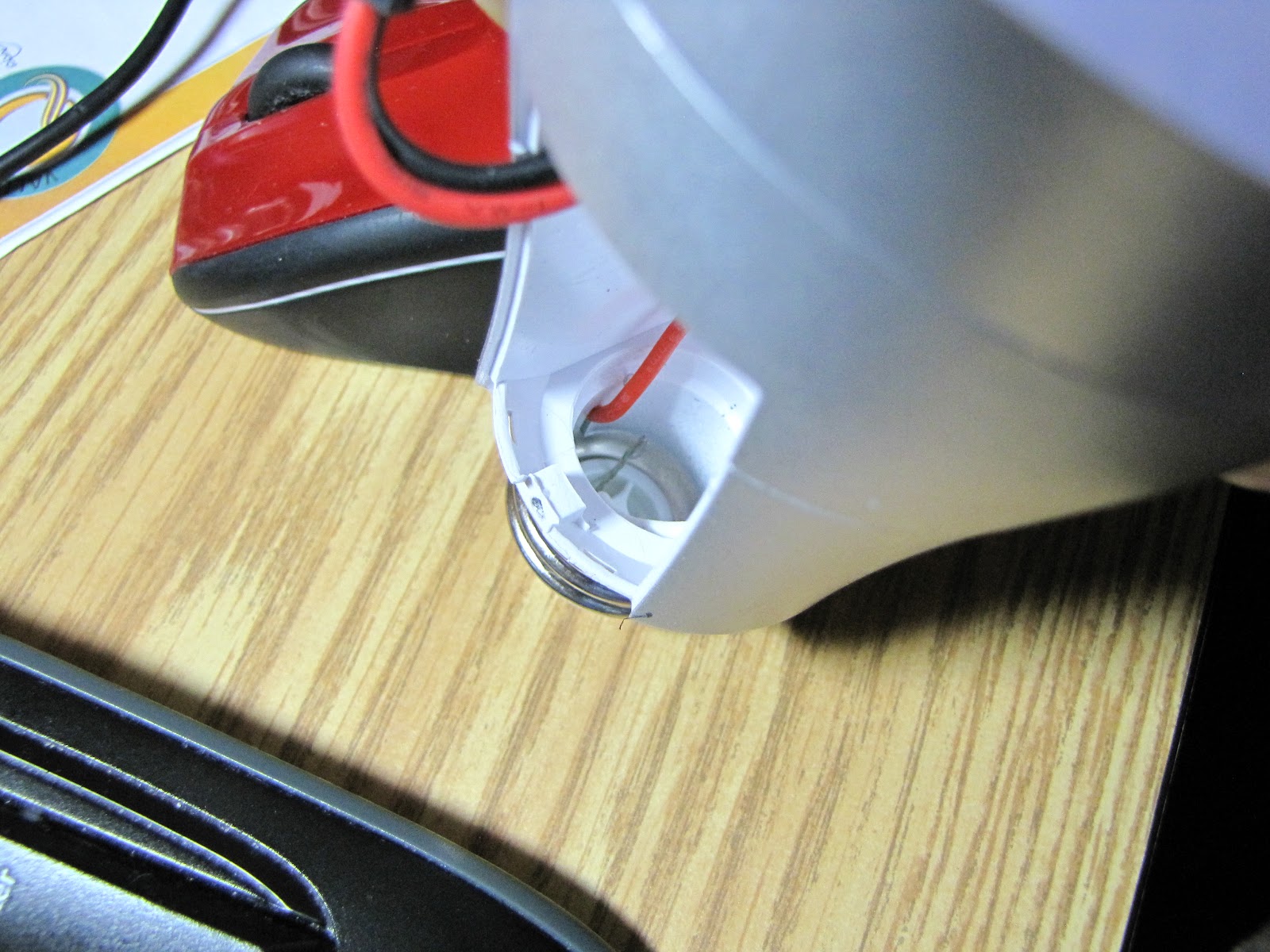 Exposed mains wire in the base of the SmartCharge

I did mention this to the SmartCharge team and I did not feel the issue was taken very seriously. While I was assured this was an issue found in only a very few of the bulb on the production line this was not quantified in any way. I was assured this issue was mentioned to the manufacturer and corrective measures would be taken to ensure this does not happen in future.

In conclusion the SmartCharge 2.0 is an interesting and innovative solution to an increasingly common problem. The easy of use and the simplicity of installation make this a truly foolproof product.

That being said at this point there are some issues with the product that need to be addressed before I would buy into such a product on a large scale. Firstly is the true power consumption. While the LED part of the bulb may be rated at 8 Watts the true consumption is above this. The cost of energy consumption calculation put out by the manufacturer is both false and misleading.
Second is the constant charging of the battery. If the battery is 90% full there may not be a need to charge it again and again. Maybe rate the bulb for 3 hours operation and then if the bulb is only 90% full you will still get the rated number of hours.
Thirdly is the standby power consumption of the battery. If the bulb is not used for a day or two I should not find that the battery is in a considerable state of discharge. The manufacturer may want to look at a way to decrease this standby power consumption. This would give an overall better product, both in power consumption (closer to the rated 8 Watts) and longer standby times (battery not discharging in a few short days).

Lastly is the safety issue. If SmartCharge can clearly show that the bare wire in the base of the bulb was taken seriously and is no longer an issue. As well as that the UL compliance rating is followed correctly then I would look at the SmartCharge 2.0 as a truly viable and worthwhile product. If SmartCharge does come back with other information regarding any of my issues, I will gladly update this blog entry.